We hopped on the night train to Chiang Mai feeling a little bit apprehensive about the 12 hour journey ahead, however as soon as we boarded the train we were pleasantly surprised. The train was fully air conditioned, smelled pretty nice and there was just 2 bunk beds on either side of the carriage with loads of room in the middle to walk through. The beds were a good size, with a privacy curtain a reading light and plug beside each bed. We were delighted to see that our reserved beds were not currently occupied and settled in for a good nights sleep. The only bad thing about this train was that they didn’t dim or turn the lights off all night so it made it very difficult to get to sleep, but otherwise it was spot on.

When we arrived in Chiang Mai it was still really early, around 9 am, so we grabbed breakfast in the hostel and then just waited for our room to be ready. Once we got our room, our first priority was laundry- not very exciting but we hadn’t had the chance to do our laundry properly since the hike, so we running very low on clean clothes. In most hostels in Asia they offer a laundry service where they charge per kilo, but this can work out quite expensive so instead we found a launderette where we could go in and do it ourselves. This works out much cheaper in the long run- top tip for anyone planning on backpacking!

We arrived in Chiang Mai on a Sunday and we were recommended by our hostel to go to the Sunday night market that started at 5 pm. We wandered down for about 5.30 pm, expecting to spend an hour there max, but 4 hours later we were still meandering through this maze. It was the biggest and most extravagant market we have been to so far. They were selling everything from scorpions on a stick, paintings, souvenirs, fruit & veg, furniture, you name it.  It went down almost every street in the city centre and in and around the temples. We would think that we were at the end, but then it would turn right at the end of the street, and then at the end of that street it would go around another corner, it just went on and on.  There were areas of the market that were dedicated to food, and we made a good stab at trying everything veggie that we could find, we were stuffed by the time we ended up going home. 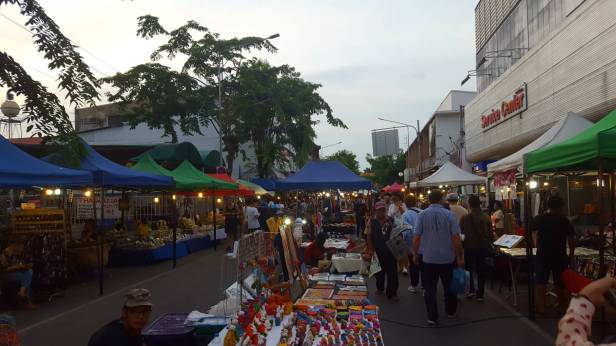 The following morning was the day that we had been looking forward to since we booked our flights to Thailand- The Elephant Nature Park. We awoke early, grabbed breakfast and got picked up outside our hostel at 8.30 am. The journey to the park took longer than we expected- about an hour and a half. We passed so many other elephant parks and ‘sanctuaries’ and we were starting to get worried that we had been pulled in to a tourist trap. We had researched for months what elephant park we should go to, and if we should go at all, because we have heard horror stories about how some of these parks treat the elephants and how unethical animal tourism can be. The Elephant Nature Park is the only park in Chiang Mai supported by responsible traveller and it has really amazing reviews so this was where we ended up. We decided to go to a small project that the Elephant Nature Park supports called ‘Elephant Delight’. This has 3 elephants that have been rescued from riding parks and they now live in a small village and are looked after by the villagers. They have free reign of the surrounding forestry and can come and go as they please.

When we finally arrived at the park we had a quick safety briefing and we got told our itinerary for the day. We then chopped up sugar cane to give to the elephants as a treat so they would get to know us and trust us. Then we were finally introduced to 2 of the 3 elephants that we would be spending the day with. The third elephant had injured her leg falling down a hill a couple of weeks before so she wasn’t able to walk down to meet us, but we would see her later when we walked up to their sleeping area. We fed the 2 elephants their breakfast of bananas and sugar cane and got to know them a bit better.

When all the sugar cane and bananas were gone, we were given a bag of bananas and told to walk ahead of the elephants down a road and they would follow us if we keep giving them bananas. This was one of our favourite things we did all day. The younger elephant was pushing the other one out of the way to get more bananas and they were trying to steal bananas out of our bags- it was hilarious and so much fun.

We arrived at a clearing that had a shelter for the elephants and a small mud bath where they went to cool off. The third injured elephant was also waiting for us there. We made some rice balls with rice, bananas and other grains to feed to the elephants to help their digestion and then spent some time observing them as they went about their business.

Before we knew it it was time for our lunch. The ladies in the village made us a veggie buffet of traditional Thai food which was delicious. After lunch we went back to the clearing where the elephants were relaxing and got some more bananas and lead them down to the river where they got in and started bathing themselves. The youngest one was loving it, she was rolling around in the water, spraying herself with water, and just generally having a great time.

When the elephants were finished bathing, it was time for us to go. We got a bamboo raft across the river to where we got the bus back to the city. It was such a great day from start to finish and we were so relieved to see that the elephants were happy and treated well. 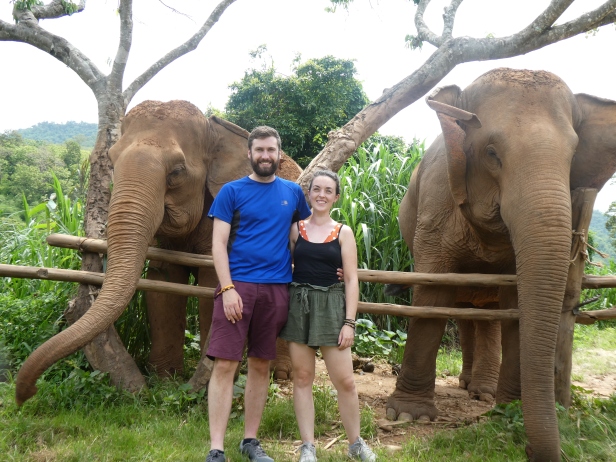 The next 2 days in Chiang Mai were spent wandering through the city, visiting some of the many temples that they have (there are literally 2-3 on every street) and enjoying the coffee in numerous coffee shops. Every night in Chiang Mai there are food markets across the city. We went to a different one almost every night, but our favourite was definitely the one at the North Gate. The food there was freshly made and really tasty and cheap, and they actually had veggie options which was a plus. Our favourite street food option that we got was ‘Khoa Soi’, a curry veggie noodle soup with crispy noodles on top. For dinner one night we got 2 of these, 2 beers and 2 banana spring rolls for desert, for only €6!

We had another 5 nights in Chiang Mai and felt like we had seen everything that there was to see, so we decided to go to a small city called ‘Pai’ for a few nights as we had heard that it is a must see while in Northern Thailand. We booked a bus from our hostel and started on the road with 762 twists and turns from Chiang Mai to Pai.

📍Roy’s Peak; The hike that almost killed me . . . . #royspeak #arewethereyet #cantfeelmylegs #travel #newzealand #travelnz #views #wanakaviews #travelcouple
‘Don’t be sad that it’s over, smile because it happened’ ✨ . Best Christmas with the best people ❤️ . . #christmas #brennansinNZ #travel #travelnz #newzealand
This time last year I was ringing in the New Year at work, looking at @terriemcevoy ’s pictures from Mount Cook thinking, that’s where I want to be next year.... and here we are 🙈🏞 . 2019, you’ve been amazing, looking forward to whatever 2020 has to offer 🎉🎇 . . . #mtcook #newyear #newzealand #travel #travelnz #sitstarsee #justgo
New Zealand you’ve done it again 😍💫 . . . . #newzealand #travel #travelnewzealand #lakepukaki #lakeviews #mountainviews #mtcooknationalpark
Happy wedding day to our favourite cork boiiii’s 💑 Have the best day lads, absolutely gutted that we can’t be there but looking forward to celebratory pints when we get home ❤️
Image of me and @bernardkeville right now #merrychristmas🎄💫
Follow Adventure buddies on WordPress.com