After our hike we spent 2 days in Kathmandu relaxing and reviving ourselves in preparation for our next adventure to Thailand. Our first stop was Thailand’s capitol city of Bangkok. We have heard many reports of Bangkok being a hectic and busy city, but after facing New Delhi in India, Bangkok felt like a breath of fresh air. The first person we asked for directions from in the airport was so friendly and willing to help, and actually directed us to a cheaper bus into the city than we had been looking for. This was such a stark contrast to our New Delhi airport experience and we felt instantly at ease.

Our hostel was located about a 10 minute walk from Khao San Road so this was our first port of call. During the day Khao San Road is pretty much like any other street in Bangkok, nothing overly special, so we just grabbed some food and spent the rest of the day wandering around getting to know the area. The following day we decided to get a hop-on-hop-off boat down the Chao Phraya River. This was really cheap for a one day pass and you could hop on and off as many times as you liked, we would highly recommend. 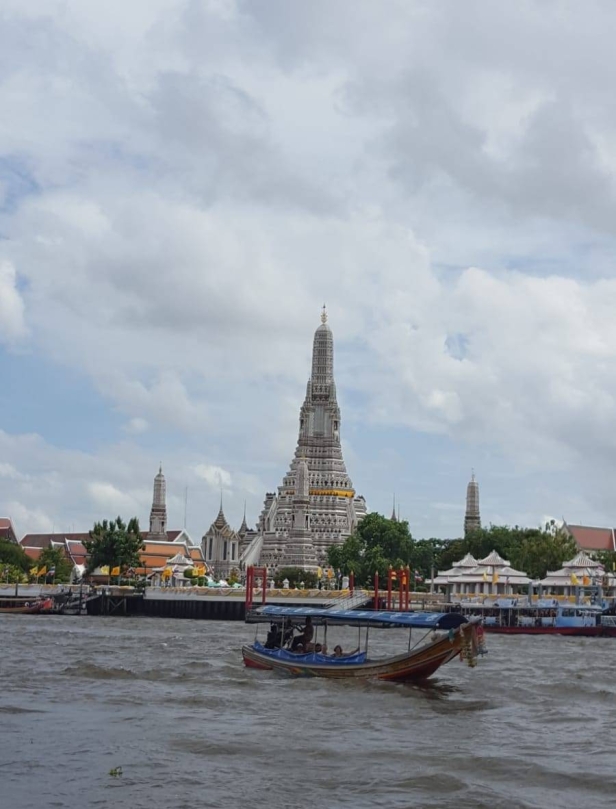 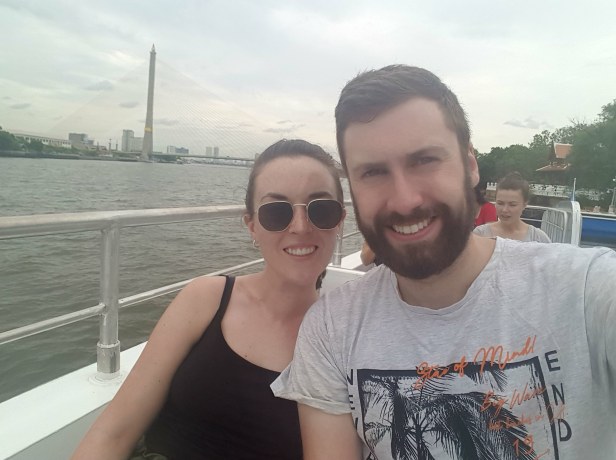 However, a lot of the stops are temples, so make sure you  wear something that covers your knees and shoulders, unlike us. For all the other temples that we have visited, a shawl over a string top covering a ladies shoulders and shorts down to a mans knees was sufficient, however not for the Grand Palace in Bangkok. Bernard ended up buying ‘I went to Thailand and found myself’ elephant trousers, which he was delighted about as you can imagine, and Roisin ended up buying an entire new outfit. Entrance fee was 500 Bhat each on top of the cost for the new clothes, so this ended up being quite an expensive temple, and although it is really nice, it’s definitely not worth the price. 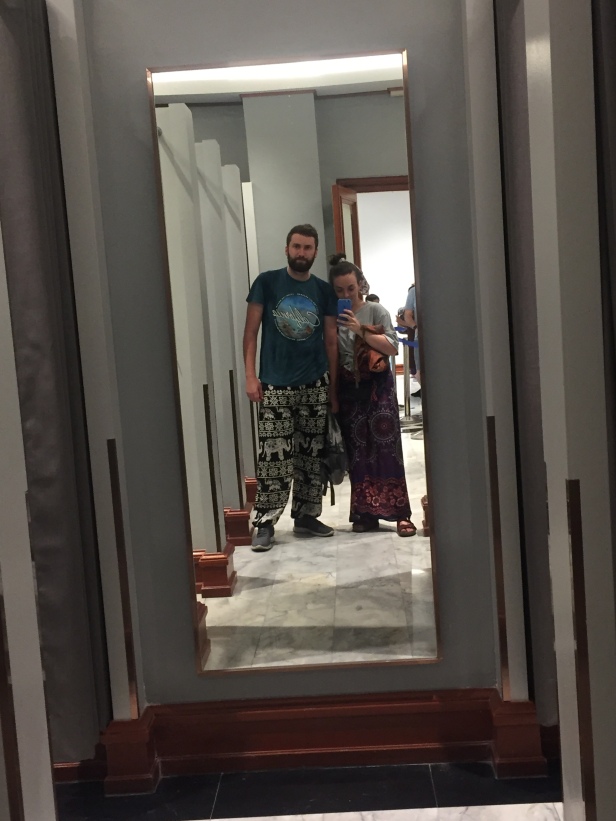 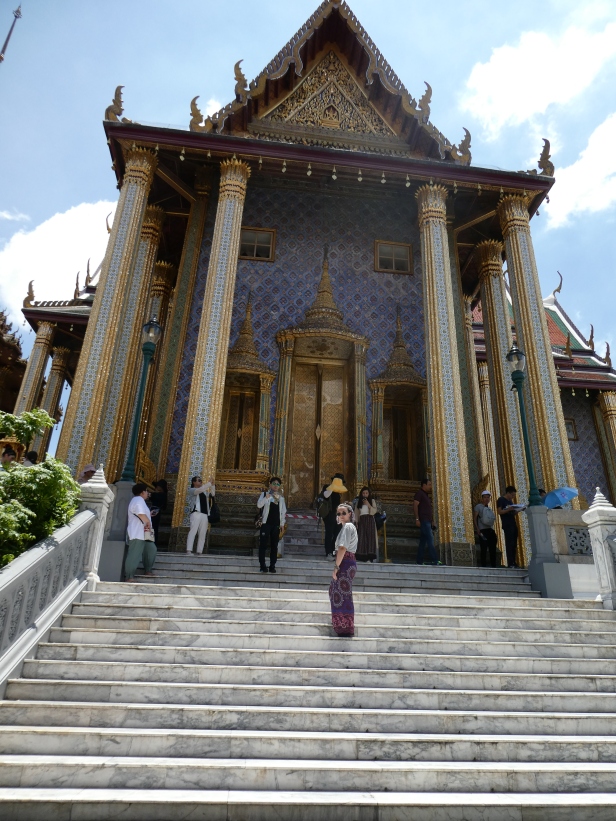 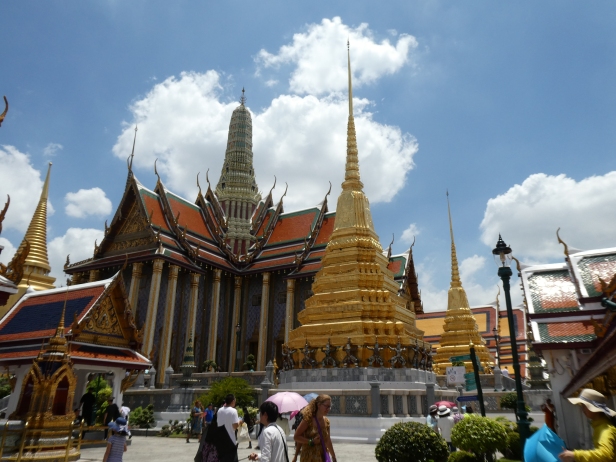 If anyone is planning on going to Bangkok, we would advise skipping the Grand Palace and spending your money on some of the other beautiful temples where girls can cover their shoulders with shawls and shorts to the knee are fine for boys, for example Wat Pho (Temple of the reclining Buddha) and Wat Arun. 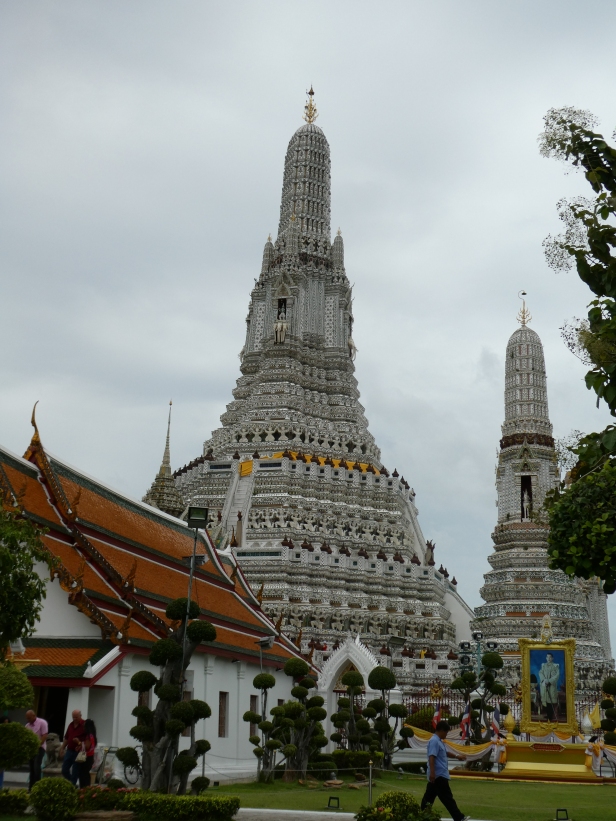 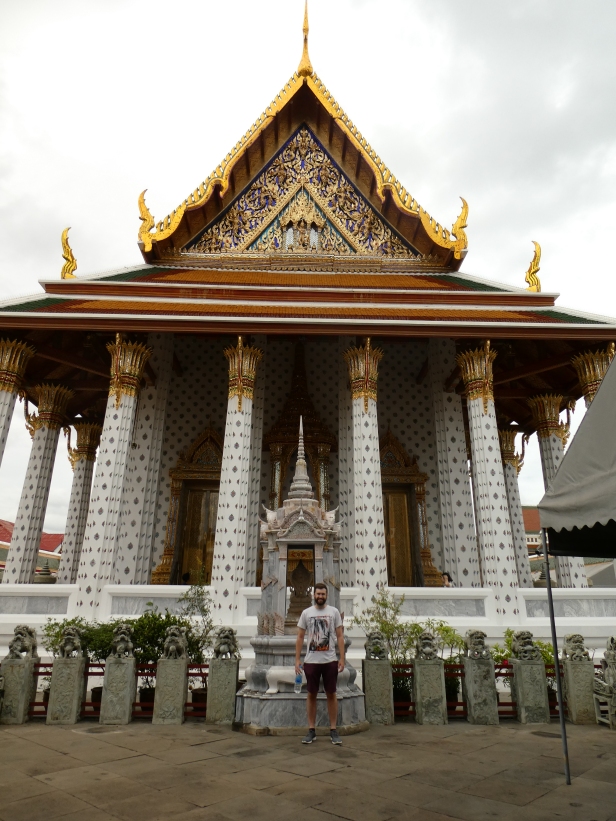 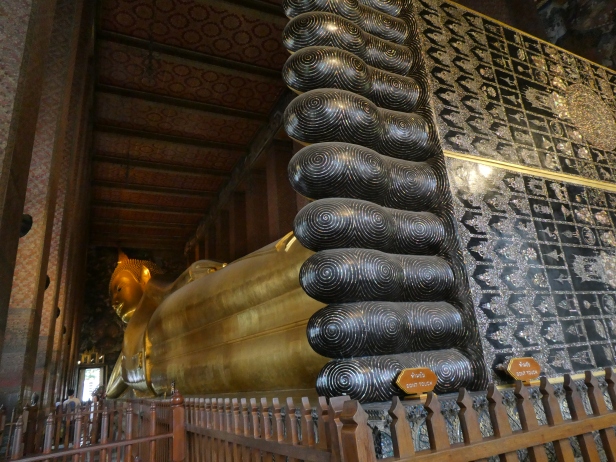 When we got back to our hostel after the boat trip, Roisin ended up being really sick, probably from some cheap food we got in Kathmandu, and the next 2 days were spent in the hostel. On our last night in Bangkok we made it to Khao San Road for a drink (or 3). After 6pm Khao San Road completely transforms to the ‘backpacking centre’ that we had heard about. The entire street is packed with clothes stalls, massage beds, bars, night clubs, food stalls selling all sorts from Pad Thai to cockroaches and westerners looking for a night out. Although we didn’t have the bucket filled night out that we were expecting, it was an experience that I think every backpacker should experience. 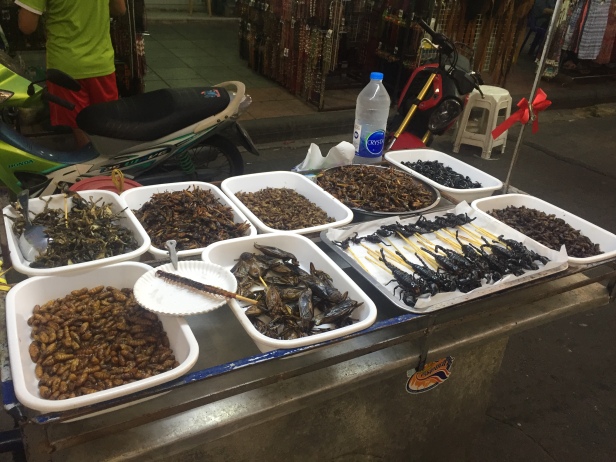 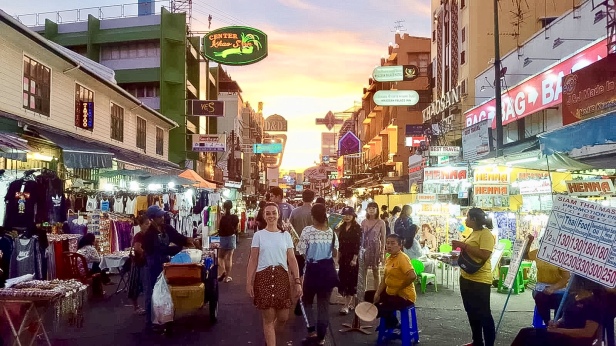 The following morning we got a bus to the city of Ayutthaya. This was the capitol of Thailand before Bangkok and is home to over 200 temples, most of which have been partly destroyed in wars. We decided to not spend too long here and instead just do a quick day stop over. We got a tuk-tuk tour which was a really good way of seeing the city and the main temples. The highlight of this tour for us was definitely Wat Mahathat which is where the infamous Buddha head is entwined within the roots of a tree. This was really incredible to see in person after seeing so many pictures. We also visited Wat Lokaya Sutha, the reclining buddha and Wat Phra Ram. The temples all begin to look the same to be honest after you’ve seen so many of them so this one day tour was plenty for us. 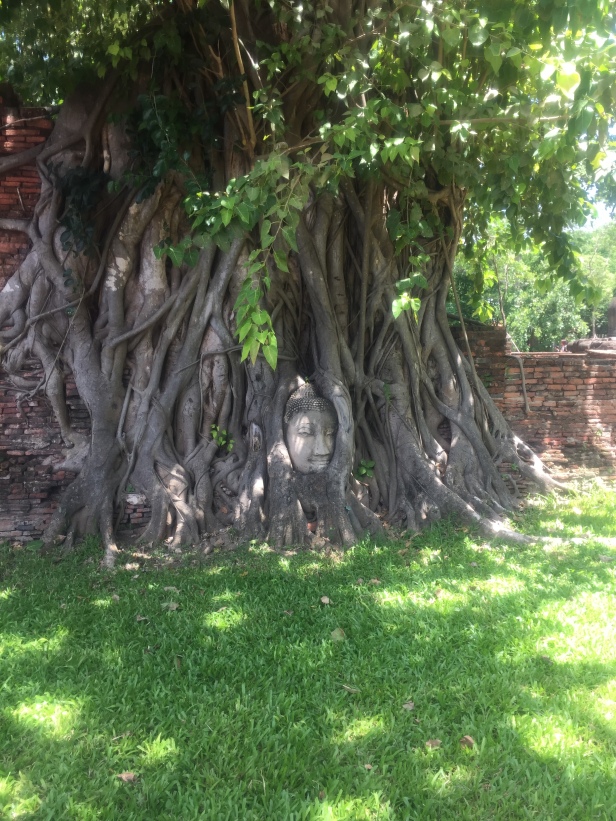 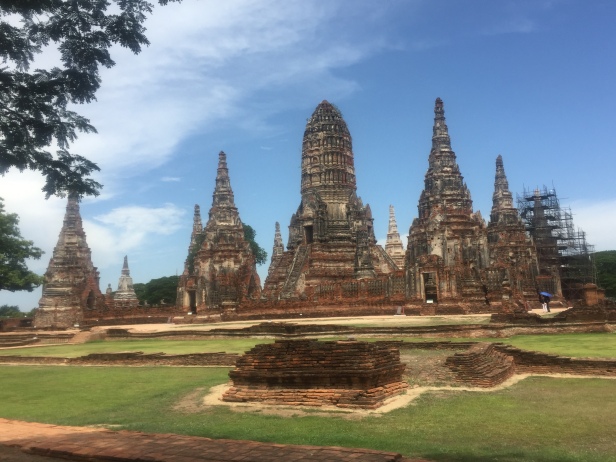 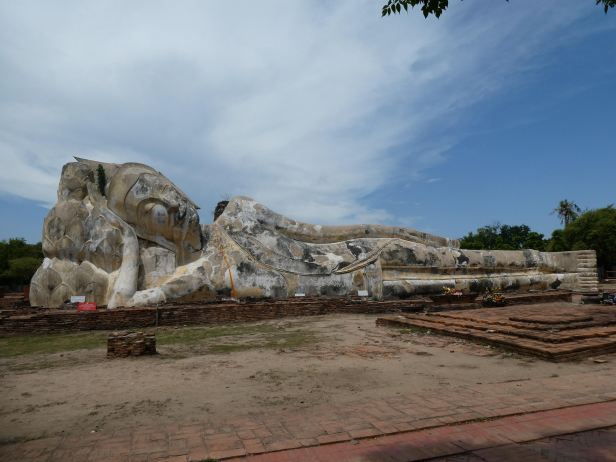 That evening we got prepared to take our second night sleeper train of the trip to Chiang Mai and hoped that it would be a better experience than our sleeper train in India. 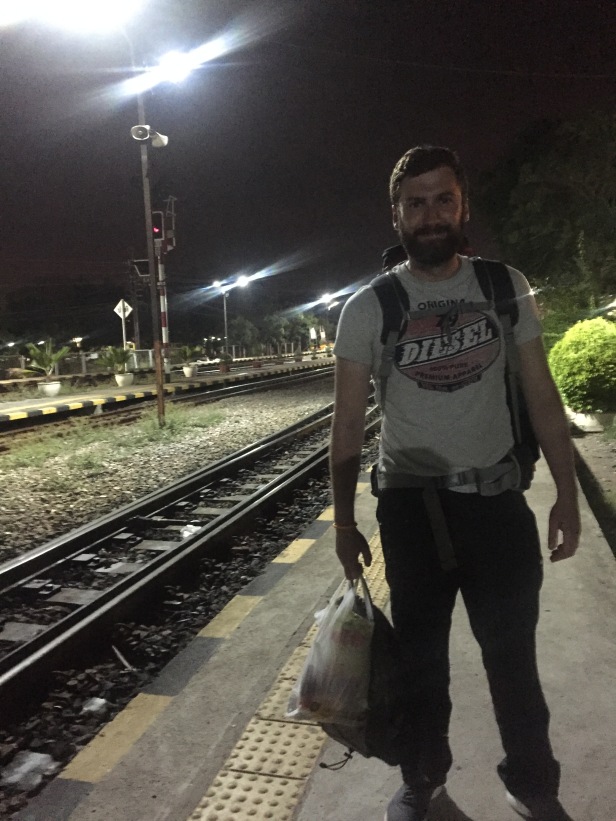